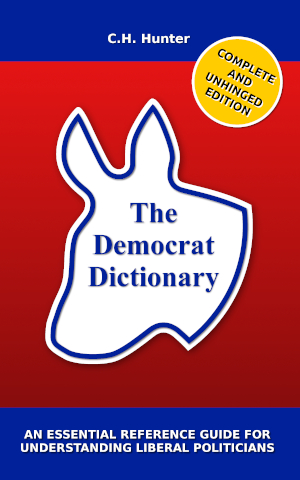 This book makes fun of Democrats. It is part satire, part joke book, and part serious commentary on the disturbing practice of language manipulation by liberals.

The Constitution of the United States is a considerable roadblock to the liberal agenda. If you are a radical leftist and you know you can't easily change the Constitution, how can you go about getting the drastic change that you want right now without having to wait?

The answer is very simple; just change the language. Want to take away the right to own a firearm? Just change the meaning of “bear arms” and the Second Amendment takes on a whole different meaning. If you want to take away freedom of religion, just redefine “free exercise thereof” as stated in the First Amendment.

In a world of emojis, abbreviations, and made-up words, the English language is becoming watered down. Liberal political operatives are able to take advantage of this phenomenon to redefine the language in a way that benefits the progressive agenda. The purpose of this book is to bring this threat to light in a funny but serious way.

The book is arranged like a real dictionary. Here are some sample definitions:

blind [ blaɪnd ] - joke
adjective: a condition suffered by Jeffrey Epstein’s prison guards; doctors who examined them after the incident determined that the temporary affliction was caused by a large sum of money paid to them the day before

economics [ ˌɛkəˈnɑmɪks ] - satire
noun: the study of money and stuff; so easy a bartender from the Bronx can do it

feminist [ ˈfɛmənɪst ] - satire
noun: a woman who is simultaneously powerful and a victim of the patriarchy

phone [ foʊn ] - satire
noun: the $800 device that you use to check your food stamp balance

pro-choice [ proʊ-ʧɔɪs ] - real
adjective: when you can choose to kill your unborn child, but you can’t choose to carry a gun for self-defense, drink a soda, or use a straw

regret [ rəˈgrɛt ] - joke
noun: that feeling you have about your liberal arts degree from Stanford

United States [ juˈnaɪtəd steɪts ] - satire
noun: a country so racist and terrible that millions of people have risked their lives to come here

victim [ ˈvɪktəm ] - satire
noun: a person who has been harassed and arrested by the police just for minding their own business in the liquor store after hours

BONUS FEATURE: The book also includes the full original texts of the Declaration of Independence and the Constitution, including the Bill of Rights and all Amendments.